It’s a new day (yes it is) and yet another brand new series for you lucky readers.

Looking through the tinted spectacles of yesteryear, this new idea will try and unearth some gems that have long since gone under the radar. Plus, I can also give you an insight into some of my favourite games that have helped shape my preferences and gaming identity.

I’ll dispense with all the pleasantries and get straight into the meat of the article.

What a damn fine game.

It oozed style and tight gameplay whilst bonding the parallel universes of cowboys and steampunk vampires. Such cohesion shouldn’t have been possible with such vastly opposing genres and themes, but Darkwatch pulled it off.

An naughty outlaw by the name of Jericho Cross robbed a train. He inadvertently freed a bigger, naughtier demon by the name of Lazarus. Ol’ Lazzy gets the hots for Jericho and chomps a chunk out of his neck; passing on vampirism to him. Jericho aligns with a female by the name of Cassidy to take down Lazarus. She works for an organisation called Darkwatch.

Jericho combats his new maternal cravings for the red stuff and uses his newfound powers to become a big, strong, unstoppable boy.

Throughout the game, he can either be an angel cowboy or a devil one. The consequences of your actions will become apparent as you go on; and especially during the games final battle. One fight is an arse, one is an even bigger arse 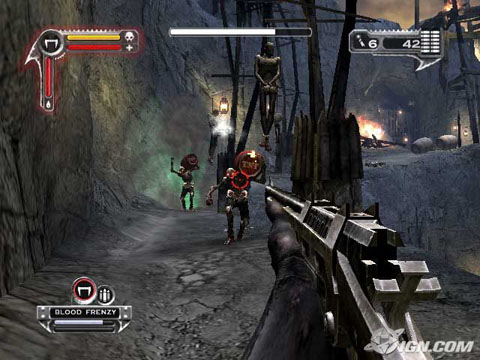 Keggers. The cause of so many deaths.

I remember playing the demo for this game and I had so much fun. Bear in mind it was 2005, and FPS games were in limited supply, as opposed to the oversaturation in the  generation that would follow. It had a unique theme, a horribly unsettling setting and solid gunplay.

I genuinely lost count of the undies I unashamedly soiled in the wake of…Vipers.

Imagine your worst fear; you feel your body shrivel up and turn numb in panic. Every pore of your body perspiring and creating your own Olympic-size, swimming pool to splash around in the hope that you’ll drown to avoid your fear…unless your fear is drowning; in which case…forget it, Vipers are worse.

This is how me and my best friend felt playing this as unknowing 12-year-olds.

Oh, and banshees; their penis-curling screams could make you involuntarily ingest your own genitlia as a defence mechanism.

The atmosphere was always tense, the dark and dingy environments made you very aware of how isolated you felt. Let me tell you, slowly walking through a cramped sewer and turning around to see a Viper charging towards you…I can actually feel myself leaking thinking about it.

Fortunately, you had an extensive range of weapons to take down these menacing beasts. Ranging from your default revolver; The Reedemer, to dual pistols, to shotguns with hatchet blades on the handles, to thermal sniper rifles etc. There was such a diverse arsenal that the gameplay never felt boring; plus certain scenarios would force you to change up your loadout regardless.

They guns even kicked like a stick of dynamite that had just given birth to its own tiny herd of baby dynamite. Note: dynamite is also a weapon you can use too.

Scintillating sound and design aside, the narrative is serviceable. One of the longstanding criticisms of this genre is the never-ending stream of -seemingly- tacked on stories; placing the emphasis on having efficient shooting mechanics instead. But Darkwatch does a good job of just about making you care about the characters, even if Jericho Cross isn’t the most effervescent individual to grace a screen.

I’ve never cared for morality choices in games, but the ones in Darkwatch at least had  some effect on the game. Your abilities hinged on which side of the fence you chose, with some being more powerful than others.

In addition, another major plus for Darkwatch? Co-op! A dying tradition that some games are desperately trying to keep alive. Local co-op. Take control of two Darkwatch members and battle through death together. It makes the game a bit easier too, but that’s not saying much. Some of the shootouts are just brutal. Finishing this game on the hardest difficulty was not for the faint of heart, but it’s JUST doable.

Despite being in development, Darkwatch 2 never got further than a brief showing at GDC 2006. It looked like being deeper and scarier. Alas, it never came to fruition. One of my biggest annoyances that I’ll ever experience with games.

Darkwatch is a HUGELY underrated FPS game that sadly never got the sequel it deserved. It had so much potential it was untrue. A interesting dynamic with endless possibilities for the future. This could’ve been the benchmark for FPS games, showing that creativity is a good thing. Also that you don’t have to create a generic, linear hallway shooter with about as much personality as a lump of coal…in a sock.

The concept of a steampunk, vampire-cowboy should have had High Moon Studios rolling around – filthy rich – in the green paper.

Maybe one day…one day…Kickstarter? Ever heard of it High Moon? Some of us are MORE than willing to help you get this long-awaited sequel produced.